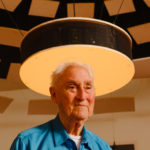 Intro (0:08): Hi! My name is Dave Shaff and I’m the director of Audium Theater in San Francisco. Lately, my role has been drastically shifted from performing nightly and managing a small sound theater to being a bit lost, confused, and really unsure of the future. Like many artists around the world right now, I want to respond in some way to all the emotions of this moment. But, how are we going to create art in the world of isolation? How do we bring people together through social distance? I’ve been grappling with these questions for months now, so I’ve decided to reach out and ask some of the talented folks around me. This podcast will focus on how bay area artists are surviving during the COVID-19 crisis, and seek to find a way forward to create a new world in this age of uncertainty. Today, I’m going to start off this first episode with someone very close to me — Stan Shaff. Stan has worked with music and sound his entire life. He was making sound art before it was even called sound art. He worked with the Tape Music Center in the early ‘60s, as well as Anna Halprin’s experimental modern dance troupe, then he went on to co-found Audium Theater in 1967. He’s been composing with sound and experimenting with spatial sound movement ever since. My hope is to tap Stan’s knowledge of the past and see how we can deal with this current crisis. Well, without further ado, let’s jump in to the interview.

Dave (1:55): So, I’m sitting here right now with Stan Shaff, who-who incidentally happens to be my dad. (laughs) As we look around now, there are artists who are really struggling to make sense of all this and what it means to them, you know, mainly their art and what they’re creating.

Dave (2:13): I know you’ve been through many crises over the years, dad. Do you see any lessons from your past, and how we can think about addressing this pandemic artistically?

Stan (2:24): You know, when one looks back on our lifetime it, um, it looks different from a distance. When I think back on the beginnings of Audium, it even travels back to my mindset in my very early youth. I think of, um, maybe the first time I ever even imagined the idea of space as an idea that kind of pushed my thoughts through several generations now. And, uh, I remember when I first started playing trumpet in high school, the beginnings of the,learning the craft of sound and music, and this was during WWII. The war had just begun to come to a kind of a conclusion, and, uh, I remember an incident that occurred when I was in high school at this time and it might have been the seedling of, uh, all that followed — little did I know at the time. We had a commemoration of, uh, those from-that graduated from this high school, polytechnic high school, and had gone to war and fought and many passed away during the war. And so, we had a commemoration, um, assembly and, uh, they asked that taps be played at the assembly for those that lost their lives. I was called on to do it, and I-I thought about it and I said “well, sure. I’d be glad to.” But then I had an idea that had two other trumpet players that played in the band with me – I said suppose the three of us do it, and let’s do it very interestingly – suppose one of us was up in the balcony, one played it on the stage, and one was in a closet. The idea being, one would be kind of at a certain distance, then someone on the stage would be at another distance, and the person in the closet would be, like, something way off in the distance. And, you, guess who incidentally ended up the closet– that was me. Any rate, that — we did that. And little did I know at the time, I was dealing with sound in space. And when I think back on it, that was probably my, um, (laughs) my introduction to the, uh, what happens to sound when you separate it.

Dave (4:15): Well, that just shows how, you know, even a seemingly small event, like what happened to you, can have a really profound impact on, on one’s path. I’m sure there are similar situations happening right now, where paths are being changed and created as a result of this crisis.

Stan (4:22): Almost out of, uhh, self-survival. The age we’re in right now is blown apart because of the virus, and, of course, the social and political impact — it is bringing back a lot of creative, new ways of thinking about doing and communicating. I certainly see the internet as, uh, it’s always, uh, it’s been there now for quite a while, but not with the intense inventiveness that’s beginning to show itself, in terms of how people can come together and, uh, realize things. And I think the arts are going to play a new role in that. But, almost by definition, art is togetherness. To bring both the thing you’re doing and the people who are, uh, involved in it, and the people watching or experiencing it — together, and to bring that sense of community together. Um, and, you know, even if you sit in a darkened theater, in some sense that whole little theater is a little bit a part of your own soul. Everybody’s in it.

Dave (5:35): Well, I think, yeah, what you’re saying here is pretty crucial because art kind of — it does bring people together and there’s this feeling of togetherness that, at least so far as, I haven’t been able to really feel that online. You know, people have been having virtual events, streaming musical performances, and dance performances, and it-it really hasn’t hit me in the same way as when you go out and see something live with other people. So, I think that’s kind of the question I’m trying to pursue here in this podcast, uh, is, you know, figuring out how can we find that collective energy when we’re apart?

Stan (6:13): Well, I think the more that the connection is connected… In other words, if you have like a group of ten people and they’re all visibly there for everybody to see and watch, uh, I-I’m sure increasingly we’ll discover ways of reaching across that frame and, uh, and somehow connecting up better than just simply talking through the frame. Improvements will occur that will make it a richer experience. Certainly, the sound will help. I know the idea of, uh, immersive sound gives more a sense of being with some situation, but, you can’t reach through the frame and touch somebody. (laughs)

Dave (6:55): Yeah. So, let me ask you this. If you were to design something right now to give people the experience of Audium – in other words, like a spatial sound experience – in their homes, what would it look like?

Stan (7:10): So, I’d probably do something that would engage the space and sound itself, that could give some sense of location. And I, I don’t think it’s out of the question that the people will have some kind of sound system, even in their living room, that would be more immersive that they could tie into and the sound comes into the room– into three dimensions. Maybe, where the sound is aimed at the ceiling and bounces off it to the floor, and so forth. I-I can visualize that potential that your own living room could become increasingly more spatial. And then, we could have a performance that would be more, um, in line with what really Audium represents.

Dave (7:52): Yeah, I mean, it seems to me as-as you’re talking, right now, artists, if-if there’s one thing that we can contribute is the creativity to imagine different ways of engaging with each other virtually while we’re all kind of separated here. I mean, there are already lots of examples of artists trying all kinds of techniques to reach people and, uh, I think it will continue… You know, other people will follow our lead as well and, (laughs) you know, we’re the trendsetters.

Stan (8:22): I, and I-I think it’s needed. You need those kinds of minds. People that, in effect, in-in the techie world, that can work with design and implementing, but you need that other kind of mind that goes off into the spheres. And the two different thinking processes, they really do meet on the creative levels. Something new emerges out of that, and I think it’s important for artists to be called on, and to be very aware of where technology is. And, in effect, throw the ideas against the wall and see what sticks. (laughs)

Stan (8:53): I mean, it’s always been the way to go. Uh, you don’t know what potential is, uh, and I think people with creative minds – that word creative, though has troubled me anyway, because I think creativity is the-the large term that encompasses all-everybody. Everybody’s got something, whether it’s cooking or painting a wall or just doing something in plumbing. I think everybody has a potential to do it their way that becomes quite unique.

Stan (9:24): I think that, you know, just in terms of where Audium is, perception is a wide open field for the human experience. I’ll leave it at that. (laughs)

Outro (9:41): Well, there you have it. The thoughts of Stan Shaff, composer, founder of Audium, and a pretty good dad as well. You know, in spite of all the difficulties and hardships that people are going through right now, it’s also a, uh, amazing opportunity to take inspiration, find all kinds of creativity within ourselves. The plan is to get a bit more into the weeds in the next episodes, talk to artists about what’s actually going on right now, how people are taking technology and using it to their advantage, what plans people have for presenting art in this new world we find ourselves in. If you’d like to find out more about Stanley’s work and his history at Audium, look at our website Audium.org. If you enjoyed listening, please subscribe and keep on listening. Now, in the next episode we’ll be talking with sound artist and academic Blanca Bercial about sound and silence in the era of COVID-19. Hope you join us for that one. Until then, stay safe and keep creating.